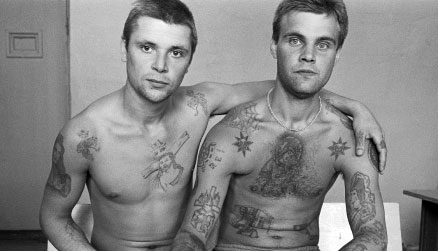 A rare glimpse into the dark world of post-Soviet prison life, the London show „Russian Criminal Tattoos“ features a series of photographs of prisoners and their artistic tattoos. From the cells of Russian prison settlements in far-off places with names like Nizhny Tagil, Perm and Chelyabinsk, many of the tattoos were forcibly (and disgustingly) removed by other inmates who disagreed with it or by authorities, since the art form was illegal.

Photographs shot by Sergei Vasiliev compliment drawings by Danzig Baldaev, who from 1948 to 2005 collected 3,000 drawings created by prisoners. Both Vasiliev and Baldaev worked as Soviet prison wardens, providing them easy access to the works. Despite that the KGB still had to consider the project, finally giving Baldaev permission to document and study the works as part of Soviet history.

Find out more in the UK´s Guardian´s Article about the tatoos and the secret language of soviet prisoners.
London-based publisher Fuel Design, who learned of the collection of Baldaev’s drawings from his widow, is behind the exhibit. Damon Murray and Stephen Sorrell of Fuel purchased and published his work along with Vasiliev’s photos in the „Russian Criminal Tattoo Encyclopaedia“ trilogy, which you can purchase from their site for £45.