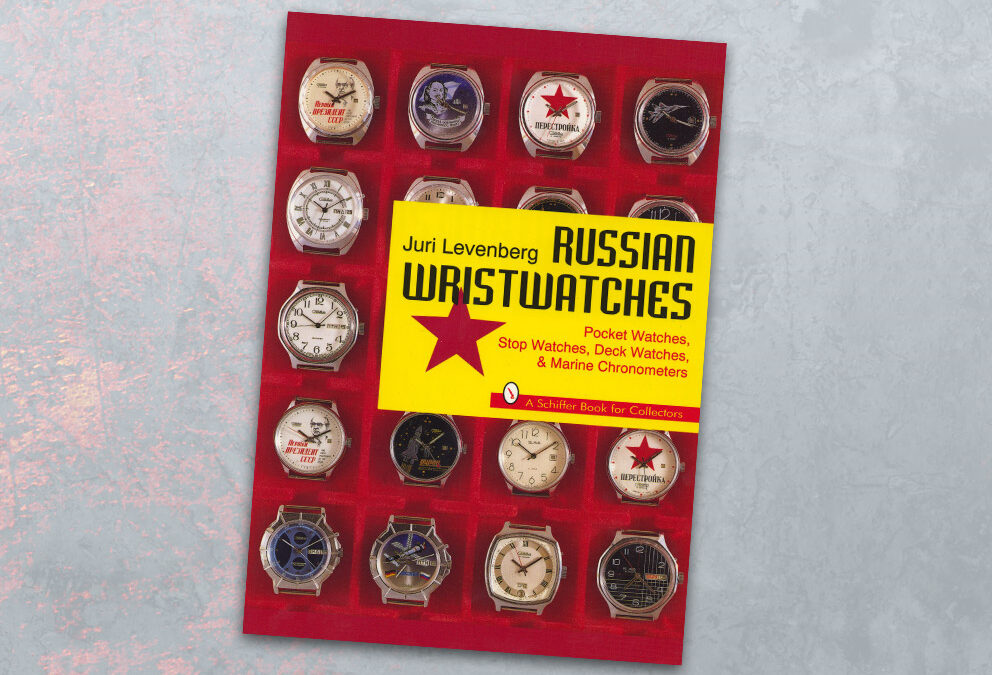 Watches from russia are very trendy. After the collapse of the soviet union, for the first time mechanical watches made by companies like Wostok, Slawa and Raketa were seen at fleemarkets, and later also at auctions. The number of prospective customers and collecting tanks is increasing rapidly.

With this book, for the first time, there are extensive information about this collecting topic.The different technology of all watches is described and the printings on the dials are explained, too. So the collector learns about the meaning of each illustration, coat and abbreviation, printed on the dials. Beside the various types of wrist-watches, airplane clocks, pocketwatches, stop watches and navi chronometers are presented. For every watch admirer this book is a perfect entry in a new fascinating collecting topic.

A Reviewer from Amazon:

Excellent Photographs of Various Russian Timepieces
A wonderful book showing the wide range of timepieces that the Russians produce, and which are now becoming available on the open market. Profusely illustrated and well documented. Includes a short, but very complete, table of cyrillic to english for the various markings one comes across. The only downside – buy two copies. The binding on mine fell apart from so much use. TAF

Book Intro:
Many books are available about collecting wrist and pocket watches, even some about modern Swatch watches.
Yet it seems a phenomenon that since the opening of the East, many Germans and other Europeans have started collecting Russian watches despite the lack of any literature. One likely reason is that this collecting field does not require too much money. It is now possible to buy a precision ‚Swiss watch‘ for approximately 150 OM. Only five years ago the minimum price would have been 700 OM.
Even years ago, the Swiss watch industry could have offered ‚Swiss watches‘ (made in Russia) at much lower-prices. For obvious reasons, this never happened, and Russian export was limited to countries of the Third World. Though the national Soviet market with over 300 million people should be big enough to absorb large quanitites of watches, the price of watches was always extremely high compared to other countries. Asimple calculation shows it clearly: by the end of the 1970s a young mechanical engineer earned between 100-120 rubles per month. The price for the simplest mechanical wristwatch was between 20 and 30 rubles.
Even today, after the opening of borders and the ongoing economic restructuring, this relationship is about the same. In the Baltic republics the retail price for a POLJOT-Chronograph is approximately 50 DM. The average monthly income is approximately 150 OM (1992). In April 1994 the retail price for a WOSTOK Model „Komandirskie“ was approximately 30 DM. This helps to explain why there are no Russian collectors in this area.
Nor are wealthy Russians focusing on this area -they are more interested in financial affairs, for example in Switzerland, or in precious stones.
Only in the West – and this is the above-mentioned phenomenon – are there numerous specialists in the field. This is possible only since the Gorbachev era. What are the reasons and motivations behind it?
Besides the low prices, the interest is probably triggered by the beautiful mechanical movements and the interesting dials, which bear witness to recent Soviet and Russian history. Decorations on the dials reflect the
events of the period during which they were made, from Gorbachev’s propaganda to the birth of democracy and freedom in 1993.
Watches from the ’60s and ’70s rarely have decorated dials. The only exceptions are military watches which bear the obligatory red star. In the middle of the ’80s Russians started to reflect and celebrate history with images and words on the dials of watches. Apart from personal taste, one can feel the national pride, the close ties 10 country and history of this people. It is obvious that investing in a collection of Russian wristwatches will bring great profits within a reasonable amount of time. It is apparent that five years from now it will be impossible to purchase a mechanical watch with alarm for 100 OM or even 50 OM.
Recently this trend can be seen with watches bearing the inscription „Made in USSR,“ production of which irrevocably stopped. Watches with this inscription were made until 1991 : from then on, „Russia“ was used. Please note that even after 1991 – for a short period only – dials bearing the inscription USSR were used from inventory. While the price for a „Komandirskie,
USSR“ used to be around 50 OM, it is now between 1 00 and 150 OM, and rising. With this book I would like to become your helpful guide and knowledgable consultant for your collection. You will not find boring desciptions of movements, but a brief and historical introduction to almost all watches available.
I paid special attention to the explanation of abbreviations and cyrillic inscriptions, which the average Westerner would not understand. Nothing is more annoying and boring than owning a watch and not knowing its historical background and relevance. Isn’t it interesting to know that the three letters MBA stand for the Russian Interior Ministry?
At this point I would like to thank my German friends who helped me with this book: Mr. Christian PfeifferBelli, Mr. and Mrs. Grimm, Mr. J. Schwer, and everybody else.
Juri Levenberg.