Watches | Relics of days gone past? 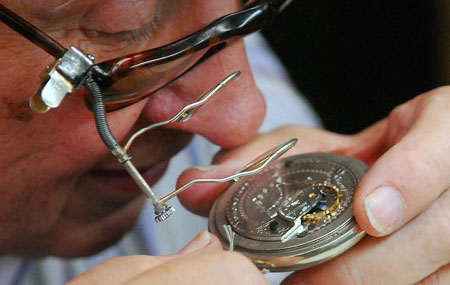 Wristwatches might be running on borrowed time. Like the record player, the watch one day could become a relic from an era when virtually no one had a cell phone and the time didn´t  blink from computer desktops.

Since 2006, watch companies have reported sales declines of 8 percent to 15 percent, according to the California-based Jewelry Consumer Opinion Council, which tracks the watch industry.

From Timex to Fossil, popular producers that aren´t in the Rolex echelon are phasing out watches in favor of better-selling accessories such as sunglasses. Higher-end producers remain committed to wristwatches and their sales appear to be constant.

But in general, „The business seems to be dying out,“ said Derek Molnor, owner of Derek Molnor Vintage Watches in New Kensington. „Twenty years ago, there were a lot more watches around and a lot more interest in it. People are moving on.“

via Watches become relics of days gone past – Pittsburgh Tribune-Review